IN MEMORY OF DAVID HALBERSTAM, KILLED THIS WEEK IN A CAR CRASH.

ONE OF OUR FAVORITES AND A HERO TO JOURNALISM, DAVID WAS AMONG THE FIRST TO USE THE WORD "QUAGMIRE" TO DESCRIBE THE VIETNAM WAR.

President Bush, with his little war in Iraq, has outspent President Lyndon Johnson with his big war in Vietnam during comparative five-year periods, according to the Pentagon's own recently released figures.

The Pentagon's chief bean counter, the comptroller, sets forth figures documenting this in his "National Defense Estimates for FY 2008." The impartial numbers show that Johnson spent $2.1 trillion in fiscal 2008 dollars on the American military from fiscal 1964 through fiscal 1968 when both the Vietnam and Cold wars were raging. He put more than 500,000 troops on the ground in Vietnam from an active duty force of 3.5 million men and women, many of them low-cost draftees.


Bush spent $2.5 trillion in the same fiscal 2008 dollars on military activities from fiscal 2003 through fiscal 2007, even though his expeditionary force in Iraq was only about one-fourth as big as Johnson's -- some 140,000 troopers -- and the Cold War was long gone.


Also, Bush was paying a much smaller active duty force, numbering about 1.4 million in fiscal 2007, during that five-year period.


The stories behind those figures, which the comptroller did not go into in his 217-page report, are that the price of paying, equipping and caring for soldiers has gone way up since the days of Johnson's draftee military; that neither Congress nor Bush has had the will to cancel super weapons, including several designed for a Cold War that no longer exists, and that American taxpayers who just sent in their income tax checks are paying more and getting less for their money because of the Pentagon's failure to hold down the costs of new weapons.


The comptroller shows on Table 6-11 (page 129) of his new report that in fiscal 1968, when the American military was much larger, the Pentagon spent $169.7 billion on its military personnel in fiscal 2008 dollars.


In fiscal 2005, when the military had been dramatically downsized but the pay of the all-volunteer force had been raised, spending on military personnel in the same dollars approached the Vietnam era total, coming in at $139 billion.


The cost of general purpose forces -- the troops and trucks and tanks that fight conventional wars on the ground like the ones in Vietnam and in Iraq, as distinguished from strategic warfare waged with ocean-spanning missiles -- has jumped from $188 billion in fiscal 1968 to $216 billion in fiscal 2007, again in comparative fiscal 2008 dollars.


As for the advanced weapons systems, the Air Force F-22 fighter was designed during the Cold War to fight Warsaw Pact forces over Europe, and the Pentagon's Selected Acquisition Report issued earlier this month shows that the Air Force will get fewer planes for more money.


The SAR reveals that the Bush Pentagon plans to buy 184 F-22s for $65.3 billion, or $355 million for just one, counting the money already spent on its research and development.


On Aug. 2, 2001, Air Force procurement executive Darleen Druyun assured a House Government Reform subcommittee that "the F-22 team remains absolutely dedicated to the objective to deliver 339 production aircraft to the warfighters at an affordable cost."


Druyun eventually went to work for Boeing Co. and was later convicted and went to prison for using her military position to negotiate the Air Force's tainted deal to lease 100 KC-767 aerial refueling tankers from Boeing.


The prices of other weapons in the Pentagon's latest SAR underscores the Government Accountability Office's lament last month that Pentagon procurement is out of control.


The SAR shows that taxpayers are expected to pay $300 billion for 2,458 Joint Strike Fighters, or $122 million each for a plane that the Pentagon originally advertised as bargain basement; $54.6 billion for 458 V-22 Ospreys, or $119 million each for this aerial taxi for the Marines that has crashed a lot and threatens to take the Corps to the poorhouse in a Cadillac; $35 billion for three Navy CVN 21 aircraft carriers at $11.7 billion a copy; and $93 billion for 30 Virginia class attack submarines despite the near demise of the once-threatening Russian undersea force, or $3.1 billion for one.


Bush was first elected to the presidency on a platform of bringing business-like practices to Pentagon procurement, including skipping whole generations of weapons if that made sense rather than making incremental improvements on obsolete ones.


Such reforms, assuming he was serious about them, have been among the casualties of Bush's embrace of pre-emptive warfare, with Iraq bloody proof of how easy it is to launch a pre-emptive war and how hard it is to get out of one.

Posted by RoseCovered Glasses at 10:18 AM 6 comments:

IN MEMORY OF A GOOD FRIEND AND FELLOW VETERAN 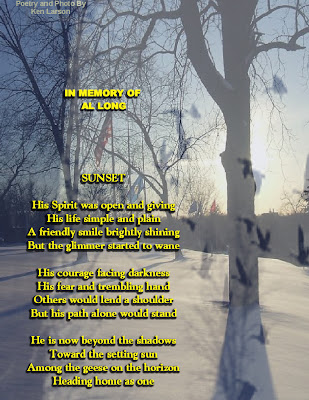 WE AT ROSE COVERED GLASSES AND THE VETERAN'S COMMUNITY AT HASTINGS WILL MISS AL LONG WHO RECENTLY PASSED AWAY AFTER A BATTLE WITH CANCER.

OUR THOUGHTS ARE WITH AL'S FAMILY
Posted by RoseCovered Glasses at 10:44 AM 1 comment: 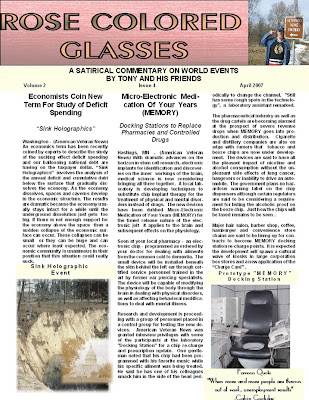