As combat veterans, we can say this is one of the most unusual and one of the most humble, yet inspiring,  addresses we have ever heard from a man who has been through warfare Hell.

We celebrate not only his award but also his words and we hope America and the world is listening.


Posted by RoseCovered Glasses at 5:39 PM No comments:

10 Reasons To Avoid The Next World War 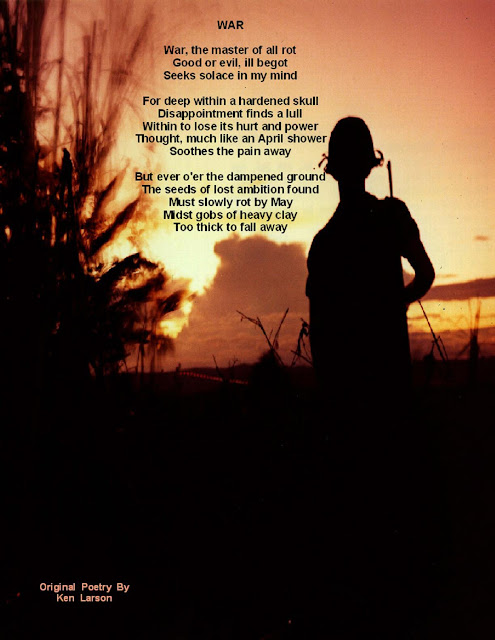 1. The pace of technology, communication and weapons has now outpaced the necessity for war as a means of advancing progress. The threat is too great for mutually assured destruction.

2. We are on new ground, never experienced before in terms of being "Wired" as a world - economically, socially, environmentally and scientifically

3. Recent events involving US war "Interventions" and the incredibly out of control nature of the Military Industrial Complex have demonstrated their danger, their folly and their contribution to the largest national debt ever to grace the face of the earth.

4. Alternatives to war in terms of scientific advancement not only are required, but are in progress.

5. The war makers are operating on world credit subject to world approval.

6. The environment is screaming for protection and we will get on with it.

7. Conflicting ideas, if managed constructively, can yield a hybrid solution to a challenge that is a better product or service than either side of the initial equation.

8. The key to managing international relations constructively is fostering an environment respectful of all points of view but led by individuals who are driving to fulfilling peaceful, progressive objectives as a first priority and who blend differences of opinion decisively.

9. Winning and losing are being redefined by the above.

10. We can no longer as a world community continue the present course of wars.

The assumption here is that the reader will be intuitively arrive at the conclusion that war is a waste and avoid it for reasons that are becoming more obvious everyday around the globe and have been addressed in each of the 10 points.

For those who do not intuitively arrive at this conclusion, war will continue and it will destroy them.
Posted by RoseCovered Glasses at 1:00 AM 1 comment:

An Employer Perspective And A Veteran’s Response To: “Top 9 Obstacles To Employment Veterans Face”

The following article from “Military.Com” is an excellent treatise from an employer perspective about the challenges often faced by veterans returning to or entering the civilian workplace.

It does not fully address, however, an understanding of why these challenges exist and what to do about them from both employer and employee perspectives. For that insight I suggest you combine your review of this article with the article at our companion blog , “Smalltofeds” “ Meeting Veteran & Employer Challenges During Transition from Military to Civilian Work”

"Transitioning from the military into civilian life isn’t always easy. Despite the fact that you come from the same country and speak the same language, the culture of the civilian working world is radically different from the U.S. military. Both have different hierarchies, practices, and industry-specific language. Making a successful transition means learning a new set of skills to adapt to civilian workforce culture. Business Insider provided a list of the top nine obstacles transitioning veterans usually face, and we’ve touched one each of them for you below.

1. You don’t see the transition from the military as starting over professionally.

When you first joined the military, how much did you know about it? Maybe a few basic concepts from books or what you heard from friends and family, but not much else. It took months of training and acclimatizing to fully integrate, and years to move up the ranks. Every step of the way brought new lessons and new ways of doing things.
The working world is no different. No matter what you did in the military, no matter how competent you are with the core skills necessary to do the job you want, it takes training and experience to climb the ranks. Although some may move quickly, the learning curve is unavoidable.
When they join the civilian workforce, it’s important that veterans realize they are, more often than not, taking a step down. Their responsibilities won’t be as intense or, likely, important as they were in the military. Accepting that is imperative to maintaining a focused, realistic perspective.

2. You overestimate how unique your skills and experiences are.

Years of intense experiences have shaped you in many positive ways. You should be a shoe-in for any civilian job, right? If there were far fewer people competing for the same positions, then maybe. Monster.com reported that 470,000 resumes were uploaded every week in 2012. If you compare that number to the number of job openings available, you have roughly 187 candidates, qualified or not, per job. No matter how qualified you are, you’re likely competing with many others who are just as capable as you or are otherwise flooding the recruiter or hiring manager. Don’t ever rely on your inherent worth – finding jobs will always require work.

3. Your resume is too long or too short.

How do you condense the depth and breadth of your work history and military experience into a single sheet of paper? According to Business Insider, you don’t. The trick is to cherry-pick jobs and tasks from your work history, military experience included, that are most relevant to the job you’re applying for. That means you might need to create a slew of resumes for different applications, but doing so will prove fruitful. An employer will respond more favorably to a resume that clearly identifies what in your history suits you well to the open position rather than a laundry list of miscellaneous accomplishments.

4. You did not proofread your resume.

If your version of proofreading is scanning for all the red squiggly lines and unthinkingly making the suggested changes, you’re doing it wrong. Proofreading tools that accompany word processors are powerful but limited. They won’t always catch obvious spelling mistakes, sometimes autocorrect to the wrong word, and their sense of grammar isn’t as impeccable as yours should be. Take the time to honestly analyze every single sentence and scrutinize each punctuation mark. Have other people read it, read it five more times yourself, then have even more people read it; do whatever it takes, even using a professional resume writing service, to make sure your grammar, spelling, and formatting are impeccable.

5. You aren’t using LinkedIn, or your profile isn’t complete.

The civilian working world takes LinkedIn seriously, and so should you. You don’t have to be a social media expert, but creating a complete profile and remaining open to networking opportunities will serve well any job-seeker. Some may even argue it’s a necessity. A LinkedIn profile shows off that you’re capable of navigating modern technology and adapting to shifting business standards. Even if you don’t have your sights set on working in upper management, having an easily accessible professional online profile will help you regardless of your chosen industry.

A few years ago, scoffing at Myspace or the then young Facebook wasn’t an outmoded thing to do. Social media started off as an interesting way to reach out to others online, but only recently has it exploded into a nearly ubiquitous cultural phenomenon and enraptured the working world. Just as with LinkedIn, you don’t have to be an expert but competency will make you a stronger candidate.
Websites like Facebook and Google+ allow you to remain in contact with individuals who may offer you a new job; even if you don’t see each other face to face on a regular basis, professionals tend to remember who they like and trust when it’s time to fill a position. Furthermore, Twitter isn’t just for bragging about food or lamenting about “first world problems” – hiring managers and companies alike often tweet about job openings and provide information about their company, industry, and other useful information.

7. You did not prepare adequately for the interview.

No matter how many jokes you’ve heard about professionals successfully faking their way through work, the reality is that valuable employees train, prepare, and make sure they’re ready to accomplish a given task. Job interviews aren’t to be taken lightly, and research and practice can only help you. The more you know about a company and the industries it’s a part of, the more knowledgeable and prepared you’ll appear during an interview. Potential employers respond well to candidates who show genuine interest, and that’s proven by knowing who they are, what they do, who their competition is, what industry trends they’re grappling with; the list goes on and on.

8. You wrote a lackluster thank you note.

Thank you notes are simple, easy, and help you stand out. After a job interview, get busy procuring and crafting your note, and make sure it gets to the right people as soon as possible. Having said that, it’s not enough to write: “Dear potential employer, thank you for the interview. I’m awesome. Take care, veteran of the U.S. Military.” The thank you needs to be accompanied by genuine introspection. Recall what you discussed during the interview, and mention one or two points in the thank you note. The note itself is a mark of appreciation, but what you write is an indicator of what you learned and how much you pay attention.

If you really don’t know what you want to do professionally, your job-searching forays are a poor time and place to figure it out. Candidates who lack focus aren’t appealing to employers. You might not know what you want to do, but no one else will figure it out for you, especially hiring managers and recruiters. Rather than use job listings and the application process to find your path, try securing informational interviews, attending gatherings for different careers, and researching online.”