When reading the story linked above, please recall the following:

As the Hastings Gazette has previously reported, there are 3 important differences between Mr. Rose and Mr. Weeks:

1. Mr. Rose was denied his citizenship by his country for a period of 4 years. His country later admitted the error and reinstated it, only after Mr. Rose acquired his file under the Freedom of Information Act on his own, located a lawyer on his own and worked on his case with legal counsel which he acquired on his own.

2. Mr. Rose is 70 years old and was denied his rightfully paid social security for a period of almost 4 years due to the government error on his citizenship status.

3. Mr. Rose has never filed for any kind of disability, worked for over 40 years in this country and paid his taxes during that period.

Posted by RoseCovered Glasses at 7:45 AM No comments: 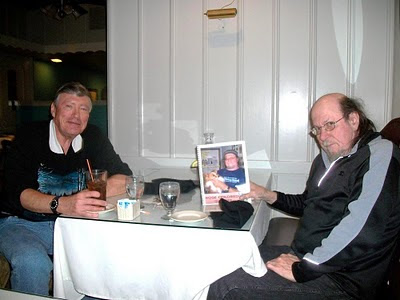 "Nearly six months after Hastings veteran Tony Rose received a $48,000 bill from the veterans’ home, he’s living on his own, but still fighting to see his money returned.

By: Katrina Styx, The Hastings Star-Gazette

Nearly six months after Hastings veteran Tony Rose received a $48,000 bill from the veterans’ home, he’s living on his own, but still fighting to see his money returned.

The home billed Rose retroactively when he received nearly $50,000 in social security back pay. He and Stella Mednik, an immigration lawyer in New York, had worked for two years to recover the social security pay.

On March 11, Rose sent a formal complaint to Charles Cox, the home’s administrator, regarding the handling of his social security pay as well as a number of other shortfalls in regard to his treatment and care at the home.

“Firstly I am writing this letter to you to ask you to reconsider keeping from me the sum of $47,957.96 that I have handed over to you under extreme duress,” the letter states.

After receiving his back pay, Rose deposited the money into his account with the home, since he had no other place to keep it at the time. The demand to pay roughly $48,000 in recalculated maintenance fees was accompanied by a threat of eviction, Rose said. The time table laid before him – just a few days – left him no time to contact Mednik.

“They basically coerced him, because they had no other way to get the money out,” Mednik said.

Rose moved out of the home in June, but he and Mednik are still fighting the home. Because Rose already paid the home, getting the money back won’t be easy.

Rose did receive a reply from Cox, dated April 26. After presenting the series of events and charges applied, Cox writes, “Our calculations are current under Minnesota Rules, and as such, we do not believe that you are entitled to a refund.”

The letter also denied any knowledge that a staff member forced, enticed or coerced Rose to pay the fee.

The reply was one of few Rose has received from the home, and the lack of communication has been frustrating.

“(My lawyers have) given up talking to (staff at the home),” Rose said. “They’re just going to go to court.”

Mednik is working with local lawyer Harry Sieben to bring the case before a judge, but that process could take another two years, Mednik said.

“Like everything else, it’s a long, slow process,” Rose said.

In the meantime, he’s enjoying his new life outside the home. When asked what his life is like now, he replied, “No blood pressure, no depression… I’m independent. I’m paying my own way.”

He passes his time by biking through town, reading, working a couple days a week and volunteering.

“You’ve gotta balance your life. You gotta give back what you took,” he said.

He also bakes often, giving the food to Hastings Family Service, Dunn Bros. and others.

As far as his relationship with the veterans’ home goes, he’s glad to be out.

“I don’t even want to go near the place anymore,” he said.

As difficult as his experience with the home has been lately, he acknowledged that for some of the veterans who live there, it’s a valuable place, especially if they have to take a lot of medication.

“They’ve got to stay there, because they couldn’t afford it on the outside,” he said.

A spokesperson from the Veterans Home could not be reached for comment."
Posted by RoseCovered Glasses at 8:01 PM No comments: