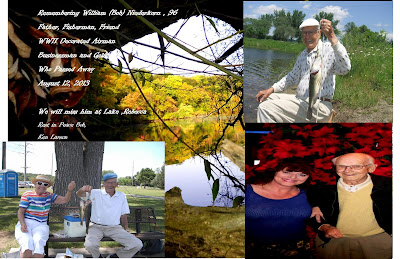 I first met Bob on the shore of Lake Rebecca near Hastings, Minnesota in 2006.   He was perched on a small stool catching sunfish, that I later learned he carefully cleaned on a glass-topped coffee table in his garage, then cooked for his lady friend Myra, who is pictured above with Bob.  Myra passed away a couple years ago.

I fished with Bob for the next 5 years, until his health became too frail to make it to the lake he had frequented for well over 70 years.

I learned Bob was a decorated combat veteran of WW II and the Korean War, who had been shot down twice over Europe flying B-17's. Bob and I often discussed our combat experiences, he in his era and I in mine.  He was a big help in my recovery from PTSD.

After his service abroad,  Bob returned to Hastings where he was a fixture at the Hastings Country Club, managing the facility for many years while also establishing a musical instrument retail store and a couple restaurants in the area.

I brought some Veteran friends who were golf enthusiasts by Bob's garage at his invitation, where he would wander down a line of equipment he had accumulated over the years, filling up a bag with clubs, balls and other tools for the links, then handing it to each vet as a gift, or for a pittance if the man felt he had to pay.

Bob was a self-effacing man who liked a laugh and a good story;  he had many to tell, with his roles in business and social settings as well as foreign travel and wars.   I met several local, prominent people through Bob, which contributed to my feel for the community.  I admired his easy, friendly demeanor with everyone.

Bob often asked me to accompany he and Myra to the local casino for dinner.  I noted he had the same look on his face when he was playing the slots as he did when he was fishing - always waiting for that big one. I met Bob's two adopted daughters, and many of his extended family in the area and in Canada.

Bob Niederkorn was a genuine, generous individual who served his country, his community and his friends from his heart.

We will miss him at Lake Rebecca,


Posted by RoseCovered Glasses at 5:00 AM No comments: