Sequestration from the Top Down or From the Bottom Up? 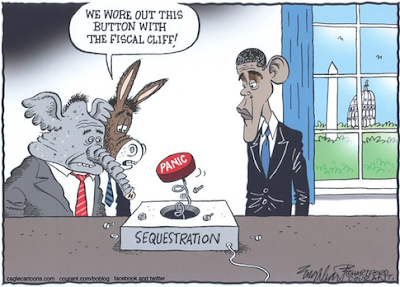 Sequestration requires across-the-board cuts of $85 billion — $43 billion for the Defense Department, $29 billion for non defense agencies and $13 billion for Medicare and other social programs — by Sept. 30. Defense reductions will affect about two-thirds of the Pentagon's $648 billion 2013 budget. Military personnel accounts are protected.

The uncertainty has lasted for weeks and months, as agencies, technically, do not have to make the required cuts until  September 30,2013.  Although the longer they wait, the more pronounced the cuts will have to be toward the end of the fiscal year.

Assuming the major weapons systems battles will be fought and the smoke will clear by default on those that are not affordable, the next largest target in the agency cuts will be manpower -- military, civil service and contractors.

From what we are reading, the major issue is whether or not the cuts will occur at the top of the hierarchy where the brass (corporate big boys, civil servants the generals/admirals) sit or from the bottom – enlisted men and their benefits and small business.

Below are 3 different perspectives on this issue for your reading enjoyment, courtesy of our stymied Congress whose budgetary laziness has created the Sequestration Drama. We suggest you choose the one you favor and advise your congressman of your choice.

THE PROJECT ON GOVERNMENT OVERSIGHT ("POGO")

".............for the first time in the more than 200 years that the U.S. has had a standing military, there are fewer than five enlisted personnel for every officer. In other words, today’s military is the most top-heavy  force in U.S. history.

Former Secretary of Defense Gates remarks on this issue per POGO:

"In  his August 2010 speech on Efficiency Initiatives, Gates referred to  these perks as “the overhead and accoutrements that go with” senior  positions, be they military or civilian, within DoD. In an interview  with Newsweek, Gates bemoaned these accoutrements and entourages that  surround generals and admirals, which he believes are indicative of a  military leadership that is “suffering from an inflated sense of  entitlement and a distorted sense of priorities"

"The head of the U.S. Defense Department vowed to cut 20 percent of some areas of the military bureaucracy in a move estimated to save as much as $2 billion.

Defense Secretary Chuck Hagel made  the announcement while speaking to troops during a trip to Naval Air  Station Jacksonville, Fla.

Pentagon Press Secretary George Little  in a statement e-mailed later in the day said the reductions would  affect the Office of the Secretary of Defense, the Joint Staff and the  Military Service Headquarters over a five-year period beginning in 2015.  They will occur whether or not lawmakers agree on a plan to avoid  automatic budget cuts known as sequestration, he said.

“These headquarters reductions should be pursued now,  regardless of future fiscal circumstances,” Little said. “These cuts  will be implemented even if Congress lifts sequester-level budget caps.”

Little didn’t specify how many personnel would be affected. The move may eliminate more than 4,000 jobs, according to an unofficial headcount of those areas. That’s less than one-fifth of 1 percent of the Pentagon’s 2.1 million active-duty troops and civilian employees.

What’s more, the Pentagon bureaucracy has only increased since 2010, when  former Defense Secretary Bob Gates made a similar pledge, raising  questions about whether Hagel — or any defense secretary — can succeed  in thinning the ranks of the military’s top-brass and senior civilians.

The number of positions in the Office of the Secretary of Defense, the  Joint Staff and the combatant commands increased 24 percent, to 21,952  in 2012 from 17,765 in 2010, according to a graphic accompanying a  recent analysis by Marcus Weisgerber, a reporter for Defense News.

More than half of the overall increase came from the Joint Staff, which  simply absorbed positions from Joint Forces Command after Gates ordered  the latter to be shuttered in 2010, according to the analysis.

Hagel’s announcement is based on a strategic review of spending priorities in  the wake of across-the-board budget reductions, Little said.

The Defense Department faces $500 billion in automatic cuts over the next decade."

"The Small Business Administration reported that the federal government again missed the mark for small business contracting during  fiscal 2012, but the gap has narrowed for primes.

There also are goals for various sub-categories of small businesses:
The annual SBA report also tracks small business contracting goals. The gap between goal and achievement is greater there.

SBA’s annual release of its small business goals isn’t without critics. The American Small Business League criticized the report saying it was “completely false and totally unsupported by the facts.”

The group claims that SBA miscalculated the actual federal  acquisition budget, and according to ASBL, small businesses only  received 8.2 percent of prime contracts.

In addition, the group claims that a significant number of large businesses are receiving small business contracts." 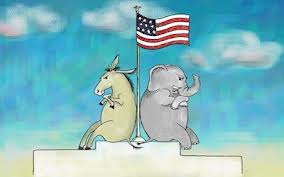