With the present day emphasis on the National Debt and Health Care, it seemed only fitting to publish a cameo of the apparently ageless satire by Tony Rose below:

"Micro-Electronic Medication of Your Years"

(Please click on image or title banner above to enlarge) 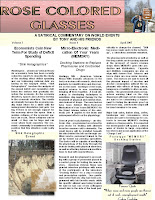 PLEASE CLICK IMAGE OT TITLE BANNER ABOVE TO ENLARGE
Posted by RoseCovered Glasses at 10:20 AM No comments:

How Does the US Stop the Dramatic Cost to the Tax Payer From Pentagon
"Star Creep"
And
"The Revolving Door”
Between Industry and Government Executives?
STAR CREEP

POGO, the venerable, apolitical non-profit has coined, "STAR CREEP" the monumental increases in general officers in the Military:

" Between May and September, more than 10,000 enlisted personnel were cut by the DoD, possibly in preparation for the end of military operations in Iraq, while more than 2,500 officers were added.

Consequently, for the first time in the more than 200 years that the U.S. has had a standing military, there are fewer than five enlisted personnel for every officer. In other words, today’s military is the most top-heavy force in U.S. history.

But the cost of Star Creep only begins with direct compensation. Other costs that surround generals and admirals—such as staff, contractors, and travel—increase with higher ranks. For example, Bloomberg recently reported that taxpayers in Huntsville, Alabama, footed a $3.8-million bill to build luxurious homes for generals in a successful effort to keep Pentagon pork flowing into the area. One such home, built for a major general, was a sprawling 4,200-square-foot mansion that included granite counter tops, hardwood floors, and stainless steel appliances."

Former Secretary of Defense Gates remarks on this issue per POGO:

"In his August 2010 speech on Efficiency Initiatives, Gates referred to these perks as “the overhead and accoutrements that go with” senior positions, be they military or civilian, within DoD. In an interview with Newsweek, Gates bemoaned these accoutrements and entourages that surround generals and admirals, which he believes are indicative of a military leadership that is “suffering from an inflated sense of entitlement and a distorted sense of priorities"

The Federal Acquisition Regulation, Section 3.1 sets out definitions of standards of conduct and conflict of interest. It details restrictions on dialogue regarding employment with officials prior their leaving their government jobs and further restricts where an official may work in industry and in what capacities relative to prior government service.

Penalties for violating these rules range from criminal prosecution for government and industry personnel found guilty of violations, to debarment of companies and individuals from government contracting.

POGO has announced: "Two Former Watchdogs Ring in the New Year on the Other Side of the Revolving Door":

“The first revolver is Michael Thibault, former co-chairman and commissioner of the Commission on Wartime Contracting in Iraq and Afghanistan (CWC) who recently joined DynCorp, one of the three primary LOGCAP IV contractors, and currently the 32nd largest contractor in POGO’s Federal Contractor Misconduct Database. It has nine instances of misconduct since the early 2000s and $19.6 million in penalties. The second revolver is Gordon Heddell, who resigned as the Pentagon’s Inspector General on Christmas Eve. The text of Heddell’s farewell email message is posted below. POGO has learned that Heddell also landed a job with a top-tier federal contractor, the global consulting firm Booz Allen Hamilton. Booz Allen, the 29th largest contractor in POGO’s database, has two misconduct instances and $3.7 million in penalties. Although it has a relatively blemish-free history, it should be noted that Booz Allen derives a substantial amount of business from contracts with the Defense Department. Booz Allen confirmed with POGO that Heddell was hired last month as a Senior Executive Advisor."

Are these companies and individuals exempt from public law?
Posted by RoseCovered Glasses at 6:54 PM No comments: