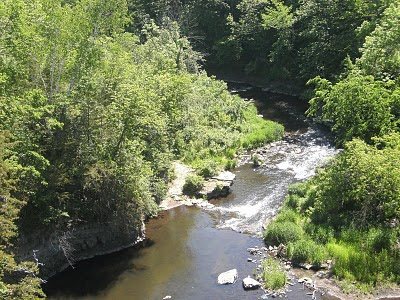 THE VERMILLION RIVER AT HASTINGS (Click to Enlarge Photo)
Over the last two years I have been pleased to become acquainted with individuals in our local government agencies whose job it is to safeguard the quality of our Minnesota waterways.
From the Public Works Department in Hastings to the Dakota County and Vermilion Joint Powers Watershed Authorities to the Minnesota Environmental Protection Agency, all have performed professionally and effectively by empowering the citizenry, supporting vigilance, conducting effective water testing and ultimately taking enforcement action against a cleaning company who was dumping toxic residue into a storm sewer near the Vermillion River.
The Hastings Gazette and Pioneer Press, who have also done a stellar job in publicizing the issue, carried articles on this endeavor recently:
http://www.twincities.com/dakota/ci_14849642?nclick_check=1

"Rose Covered Glasses" has published many articles since 2006 that are critical of government (most frequently federal government agencies). We have noted the weight government places upon the tax payer and the direction in which they have taken the country in wars, interventions, financial oversight and national debt.

It has been a pleasure to find city, county and state officials concerned, responsible, accountable and energetic in dealing with apparent pollution of valuable waterways. These agencies supported one another, communicated well and worked efficiently to bring about a positive result to a two year investigation. That type of performance is literally unheard of at the federal level.

As a veteran who spent 36 years after Vietnam on federal government weapons systems programs and as a sportsman who values Minnesota waterways, I salute the following individuals and the organizations they represent:

The above individuals and the agencies for which they work should be applauded for their teamwork, professionalism and interaction with the citizenry. Their organizations should also be models for the federal agencies in becoming lean, unburdened by politics, focused, communicative with each other and accountable for resolving pressing issues in the real world.
Posted by RoseCovered Glasses at 1:20 PM No comments:

"Rose Covered Glasses" by Tony Rose is now available as a free download from the Box Net Cube in the Right margin of this site.

The Vietnam Era Veteran fought and won a 4 year battle with the Federal Government to affirm his citizenship and obtain his social security, which had been falsely denied. The book contains some of his best satirical writings over the last few years.

Posted by RoseCovered Glasses at 2:09 PM No comments: