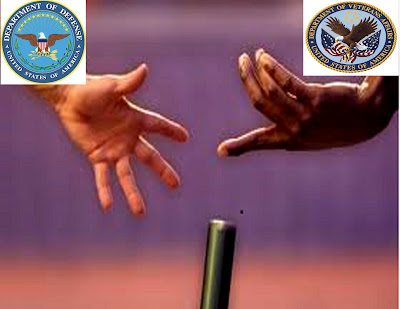 Massive backlog reveals the dire necessity for simplification, communication and efficiency in processes, systems and government service contracting in DOD and the Veterans Administration.

A recent 3 part special in Time Magazine addresses the serious gaps between treatment, benefits and services processes and systems between the military services and the Veterans Administration:

"While awaiting processing, "the veteran’s claim sits stagnant for up to 175 days as VA awaits transfer of complete (service treatment records) from DoD,":

After years of work to move toward integrated electronic records that would eliminate this sort of delay, Defense Secretary Chuck Hagel recently conceded that the Defense Department is not holding up its end of the bargain to improve the disability process.

"I didn’t think, we knew what the hell we were doing.":

The above scenario is not unlike the Walter Reed Army Hospital care fiasco a few years ago, before the facility was shut down and consolidated with the Bethesda Naval facility.


The VA decided to have those who would actually use the system (claims processors) work with software developers. This process took longer but will create a system more likely to meet the needs of those who actually use it. VA also worked closely with major congressionally-chartered veterans’ service organizations.

This year, 2013, is the year in which regional offices are being transitioned to the new electronic system.

Both the services and the Veterans Administration use service contractors to perform this type of systems development. Government Computer News (GCN)  carried a story on the difficulties experienced with, "Performance-Based Contracting", which has been made part of the Federal Acquisition Regulation (FAR) in an attempt to pre-establish at contract award those discrete outcomes that determine if and when a contractor will be paid.

Interestingly enough, the article splits the blame for the difficulties right down the middle, stating the government typically has problems defining what it wants as an end product or outcome and looks to contractors to define it for them. More than willing to do so, the contractors detail specific end products or outcomes, set schedule milestones and submit competitive proposals.

The winner is selected based on what the government thinks it needs at the time to fulfill its requirement and a contract is negotiated. Once underway, the government decides it wants something else (usually a management-by-government committee phenomena with a contractor growing his product or service by offering lots of options). The resulting change of contract scope invalidates the original price and schedule, so a whole new round of proposals and negotiations must occur with the winner while the losers watch something totally different evolve than that for which they competed. The clock keeps ticking and the winner keeps getting his monthly bill paid based on incurred cost or progress payments. The link to the GCN article is below:

The present state of the economy and the needs of our servicemen will not allow the aforementioned to continue. Government agencies are now hard pressed to insure the most "Bang for the Buck". It is in the long term interests of astute contractors to assist in that endeavor. The only way to achieve such an objective is through sound technical, cost and schedule contract definition via an iterative process of baseline management and control.


Our returning soldiers and those who have served before deserve better.

Posted by RoseCovered Glasses at 5:00 AM No comments: