The People vs. the Profiteers
Vanity Fair - November 2007
Americans working in Iraq for Halliburton spin-off KBR have been outraged by the massive fraud they saw there. Dozens are suing the giant military contractor, on the taxpayers' behalf. Whose side is the Justice Department on?
by David Rose November 2007
Posted by RoseCovered Glasses at 9:33 AM 4 comments:

HELP FOR A US NAVY VET WITHOUT A COUNTRY 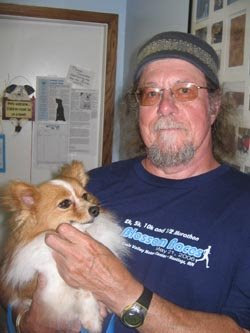 We have a military veteran friend who was honorably discharged during the Vietnam era. He served in the US Navy while having dual citizenship (Canadian/US). He was born in Canada and his family moved to New York when he was a child and became dual Canadian and US Citizens.

After discharge my friend worked in the US for over 3 decades, paying US taxes and Social Security. When it came time to retire and apply for his pension he was informed that the US Department of Homeland Security had revoked his US citizenship and did not recognize his Canadian citizenship.

The Social Security Administration will not begin his pension payments until his citizenship issue is resolved. He has been trying to work this matter through the VA, his local representatives in government (congressional level) and directly through the Social Security Office. No one seems to know what to do, who should take action and who has responsibility. The DHS will not reply to his inquiries. Any ideas?

POST SCRIPT: This request was sent to DHS today:

The purpose of this letter is to request records in my name on file in the Department of Homeland Security (DHS). The undersigned is a US Navy veteran who is a resident in a state veteran’s facility in Hastings, Minnesota. I am writing to you on Veteran’s Day to request any and all records on file at the Department of Homeland Security pertinent to my citizenship in the United States of America and the disposition of my records status as a citizen of the US, to include notifying the US Social Security Administration of my citizenship status.

I have lived in the United States since 1946 having moved from Windser, Ontario, Canada to Detroit Michigan with my family that year. I attained dual citizenship in Canada and the United States and achieved a US Social Security Number. I served in the Armed Forces of the US honorably and I have paid state and federal taxes to include social security from 1963 to the present in the United States of America.

In 2006, upon my retirement, I applied for my Social Security Pension and was informed by the Social Security Administration that the Department of Homeland Security had taken administrative records action that denied my citizenship status and precluded my being able to obtain my pension. I have attempted to resolve this matter for over a year and have been without a pension during that period.

Pursuant to requesting a hearing with regard to this matter I hereby request copies of all records in the Department of Homeland Security against my name, my social security number, my service number, my former addresses and my citizenship status, to include correspondence to other agencies such as the Social Security Administration.