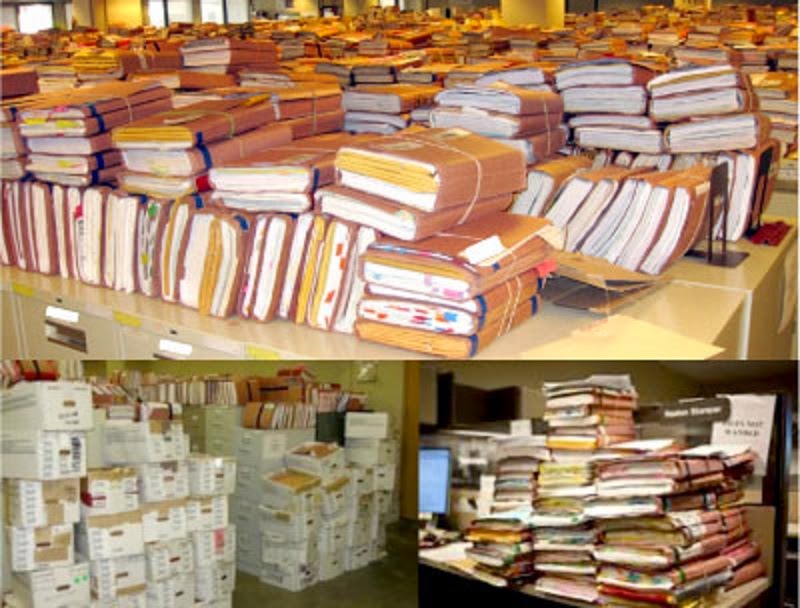 Records Backlog at a VA Center

In September of 2012 this site published an article on the VA and its efforts to improve services to veterans as well as support small business. It was noted from personal experience that excellent care was being received by those in the system but that there was a growing backlog of cases and lack of an effective process to support getting a faster rate of entrance by those returning from the battlefield.
Also noted were disturbing trends in outlandishly expensive conferences and ridiculous video productions, wasting funds earmarked for veteran care. Red flags were going up in the Inspector General office regarding mismanagement of small business set aside programs as well.

2012 Article on the Veterans Administration Services

UPDATE
Much as occurred since September of 2012.
Last month (January 2015) I visited the VA in Minneapolis for a blood analysis in connection with my annual physical. I marveled at the hundreds of personnel who were going through the blood draw process at 8AM that morning. Polite technicians handled everyone carefully and courteously. My test results were on my doctor's computer for my 11 AM appointment that day.
In 2012 I used the VA hospital courtesy center computers for veterans, finding them hopelessly out of date, security-bound and barely functioning. During my January 2015 visit I found beautifully functioning high speed computers and a courteous attendant serving many veterans at the the center
.
On my most recent visit I also went to the department that handles I.D. Cards and applied for a new one, having been informed my card was out of date. I was attended by a sharp technician who checked my credentials, transferred by data, took my picture and processed my application inside of 20 minutes and I was behind several others.
We who are in the system are still receiving fine service.
But the massive number of returning veterans has strained the VA Health Care System to the point where the Department Secretary has been fired. A corporate executive from outside the system has been placed in charge. The department has been massively reorganized into 5 regions across the country to deal with a scandalous scenario of wait times and neglect in services for incoming veterans.

When All Else Fails - Reorganize

We forecast the above situation.  It is principally due to the fact that the 5 armed forces medical records systems are not connected to the VA Health Care System and the government contractors who have attempted to develop a system to connect them have failed miserably.

A Veteran Connects the Dots

Congress is focusing on firing personnel as a remedy. In our view that is symptom-like remedy, not a solution.

Recent VA Firings
We now have a corporate bureaucrat in charge of the department who is running it like a corporation, reorganizing and establishing a 5-headed bureau under him. There will no doubt be 5 separate fiefdoms to manage. Who knows what will happen to requirements for IT as existing IT system designs get split 5 ways?

Government contracting services companies are continuing to have a field day, growing rich and failing in the classic fashion we saw with the Obama Care roll out.  Success is not a money-making proposition for these firms.  They get their monthly bills paid as they march hundreds of service workers into government buildings to catch the latest whim of the civil service program managers as they change specifications depending on which way the wind is blowing in the massive bureaucracy.

We believe those who are lucky enough to have entered the system will continue to receive good care.

We pity those younger or seasoned injured and ill who are knocking on the door and waiting to get in.

Posted by RoseCovered Glasses at 6:14 AM No comments: