Why is the US Spending So Much Money on Fighting a War that has Claimed so Few US Victims? 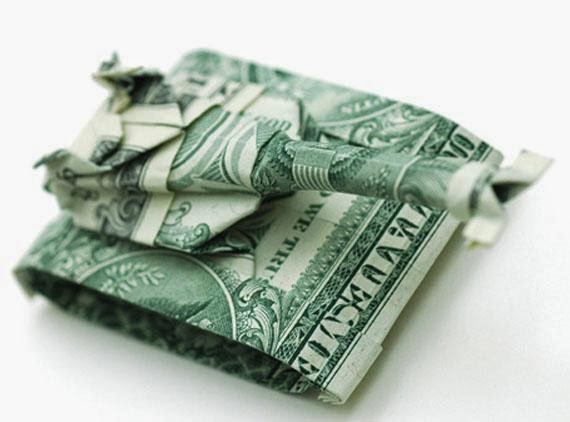 Image:  Sodahead dot com
QUESTION ON QUORA:
"The cost of war is in the trillions.  That type of money could have saved hundreds of thousands of lives in the medical industry or literally millions of lives in the developing world. Why is the US spending so much money on fighting a war that has claimed so few US victims?"

The details of exactly how this occurs were in a warning by President   Eisenhower as he left office.  His words were very prophetic:
https://www.youtube.com/watch?feature=player_detailpage&v=8y06NSBBRtY#t=76
The Military Industrial Complex (MIC) consists of both the Pentagon and the  contractors that serve it, their  lobbying firms and the politicians who  promote weapons systems,  incursions and services to the government for  profit and gain.

The MIC has tremendous power, even though it is presently being tested by  Sequestration.   For further details and  specific example of how the MIC has influenced our decision makers and  contributed to the deaths of our finest youth, please see the following:

ABOUT THE MILITARY INDUSTRIAL COMPLEX

It is broken and riddled with incompetence:

A quote many years ago from Major-General Smedley D. Butler: Common Sense (November 1935)

" I spent thirty-three years and four months in active service as a   member of our country's most agile military force---the Marine Corps. I   have served in all commissioned ranks from a second lieutenant to   major-general. And during that period I spent most of my time being a   high-class muscle man for Big Business, for Wall Street, and for the   bankers, In short I was a racketeer for capitalism

Thus, I helped  make Mexico and especially Tampico safe for American oil  interests in  1914. I helped make Haiti and Cuba a decent place to live  for the  National City Bank boys to collect   revenues in…. I helped  purify  Nicaragua for the international banking   house of Brown  Brothers in  1909-1912. I brought light to the Dominican   Republic for  American  Sugar interests in 1916. I helped make Honduras   "right" for  American  fruit companies in 1903. In China in1927 I helped   see to it  that  Standard Oil went its way unmolested. During those years  I  had,  as the  boys in the back room would say, a swell racket. I was rewarded  honors,  medals, promotion. Looking back on it, I feel I might have  given Al  Capone a few hints. The best he could do was operate his  racket in three city districts. We Marines operated on three  continents. War Is A  Racket"

The beat goes on today with the KBR's the Lockheed Martins and the other huge corporations supplying and supporting wars.

Every major aerospace company from IBM to Lockheed Martin and Boeing has totally stand-alone divisions that serve as cost centers and pursue monumental interests in the politics of government   and the billions in service contracts that are outsourced there.  This has gone on for years.  I watched it for 3 decades on the inside of these companies.

These companies routinely spend more in lobbying expenses than they pay in income taxes each year.
http://www.ibtimes.com/30-major-us-corporations-paid-more-lobby-congress-income-taxes-2008-2010-380982

The interests of these firms is now changing slightly with Sequestration   and many are making acquisitions and marketing services in the Health   Care sectors or escalating their interests in civil aviation, education   and other fields.

If it was too costly to do business with the government, 302,315 companies and  some of the largest corporations in the world would not be involved in it.  See  the  below link to contract awards and amounts in 2010 to large  enterprises:
http://www.usaspending.gov/explore?carryfilters=on