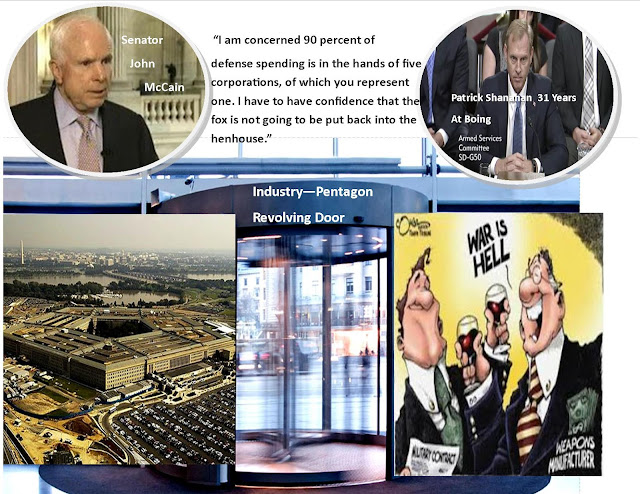 “Mr. Shanahan, you’re not making me happy,” the chairman said. “You just ducked basically every question Sen. Fischer asked you.”

After Nebraska Senator Deb Fischer tried to elicit the nominee’s position on how to respond to Russian violations of the Intermediate Nuclear Forces (INF) treaty, McCain stepped in.
McCain’s biggest objection to Shanahan, however, was the nominee’s 31 years at America’s second largest defense contractor, Boeing. (Only Lockheed Martin sells more to the Pentagon. And Sen. McCain, thanks to the long-running scandal over Boeing’s former tanker deal, is believed to harbor a deep suspicion of Boeing’s conduct).

“Not a good beginning. Not a good beginning,” Senate Armed Services chairman John McCain told the administration’s nominee for deputy secretary of defense this morning. “Do not do that again, Mr. Shanahan, or I will not take your name up for a vote before this committee. Am I perfectly clear?”

“Very clear,” said Patrick Shanahan, enduring a rocky confirmation hearing for the No. 2 position in the Pentagon, which remains unusually short on senior officials. Other senators at the hearing asked Shanahan about Pentagon procurement, especially about nurturing innovation, continuing the Third Off Strategy for high-tech weapons, and starting the Pentagon’s long-awaited audit this fall. But McCain repeatedly took the mike to berate the Trump nominee for non-answers on Russia and for potential conflicts of interest after his 31 years at Boeing.

In that initial exchange, Shanahan’s specific offense was giving a vague non-answer in his written testimony to the committee’s question on whether he supported providing “lethal defensive weapons” to Ukraine. In the hearing, ironically, when McCain asked Shanahan to clarify, he stated his support for arming the Ukrainians so swiftly and unequivocally that the irascible but aging senator seemed momentarily thrown before returning to the attack.
“I want to move forward as quickly as I can with your nomination,” McCain told Shanahan at the hearing’s end, “(but) I am concerned. 90 percent of defense spending is in the hands of five corporations, of which you represent one. I have to have confidence that the fox is not going to be put back into the henhouse.”

“Mr. Shanahan, I think you’re a fine man; you have an outstanding record; (but) take a look at your responses that you sent to this committee,” McCain said. “Some of them were less than specific, at least one of them (was) almost insulting.”

Citing US casualties in Afghanistan, Ukrainian casualties against Russian-backed separatists, and the US shoot-down of a Syrian jet, McCain made it clear he wants clear answers on administration policy — and if the committee doesn’t get them, it will find answers of its own as it works on the annual defense policy bill.

Posted by RoseCovered Glasses at 12:00 AM No comments: