We have noted improvements in the medical element of the U.S Veterans Administration with significant advances in patient care, records keeping and service to soldiers in need when they return from war or fall into circumstances in which they require assistance:

We believe the VA medical care veterans are receiving, and the associated facilities are top notch.  We base this belief on having received this care  ourselves and observing the results from others receiving VA medical services around us.

As the US has continued its war fighting incursions into foreign countries, the VA has been required to expand exponentially in terms of coverage, organization, programs and budget from the tax payer coffers. The most current budget request by the Administration for the VA tops $140 Billion for the next fiscal year.

This growth has resulted in administrative and management challenges due to the broad swath the VA must cover across the spectrum of our society and the transitions in which it must participate within people’s lives from the aging vet to the returning combatant.

At this juncture it must be noted that the VA is falling into several of the traps that other large federal agencies have encountered.  The government is in the business of spending money, not making it and growth of the type the VA has undergone requires strong management and oversight.

Below are examples of areas outside the medical care elements of the organization that are never the less posing substantial risk to the care of our veterans.

As noted by Time Magazine:

“The Department of Veterans Affairs inspector general reported that paper had piled so high at the VA’s regional office in Winston-Salem, N.C., that it “appeared to have the potential to compromise the integrity of the building.” 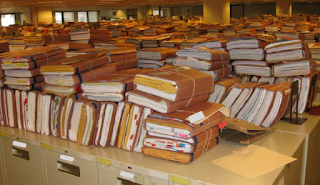 Mismanagement of Human Resources and Training

As noted by DOD Buzz:
“The chairman and ranking members of the House Veterans Affairs Committee are demanding a complete accounting of where and how the Department of Veterans Affairs has spent money on employee conferences since 2009.
The latest demand comes as the committee’s senior members released additional information gleaned from a preliminary VA Inspector General’s report on two Orlando, Fla., conferences held for VA human resources employees in 2011.
Among the findings, the VA spent $52,000 producing two 8-minute videos in which an actor portraying Army Gen. George Patton laid out the role of VA human resources personnel and exhorted them to meet their mission. A shortened version of the video is available below.
The department also spent $84,000 on VA-branded promotion items, including up to $25,000 for pens, highlighters, post-it notes and hand sanitizers.
Rep. Jeff Miller, R-Fla., and Rep. Bob Filner, D-Calif., want three years worth of data because they say past VA testimony on conference costs has been contradictory, ranging from $20 million in both 2011 and 2012, to $100 million.”
http://www.dodbuzz.com/2012/08/22/va-accounting-questioned-after-ig-report-2/

As noted by POGO:
“A new report by the Department of Veterans Affairs Office of Inspector General (IG) has found another large business improperly benefited from federal small business contracts. The offender this time is Health Net,  ranked 221 in the most recent Fortune 500 with $11.9 billion in revenue last year.

As POGO takes great pains to point out, the contractors themselves aren’t entirely to blame for misconduct in federal small business contracting. In this instance, the IG found that VA personnel responsible for administering the contracts were fully aware that Health Net, not ETS, was performing all of the work. The VA also did not properly justify its decision to award the contracts as SDVOSB set-asides rather than through full and open competition.”

The areas noted above must have management correction, be controlled and brought to the same standards of performance as the medical arm of the Veterans Administration Community.

The proclivities involving  lax administration, wasteful human resources process and abuse of small businesses, many of which veterans themselves run, must be corrected.

Doing so will insure an acceptable level of focus on assistance to the men and women who have served in our armed forces.