Glad I Did Not Take the Job

In 2008 at the tail end of a 36 year career in Aerospace and Defense I was offered a job  in the procurement by BAE from Lockheed Martin of the long-range land attack projectile, or LRLAP, a round designed to be fired from the Zumwalt Stealth Destroyer’s massive 155mm Advanced Gun Systems weapon that BAE produced.

I am truly grateful I did not become a part of this debacle.

“In late 2016, the service canceled plans to buy the long-range land attack projectile, or LRLAP, a round designed to be fired from the ship’s massive 155mm Advanced Gun Systems weapon.
At about $800,000 per round, the ammo was just too pricey to load up on the three ships in the limited Zumwalt large destroyer class.”

“But it’s now 2018, and the ship is expected to reach initial operational capability by fiscal 2020. And there’s still no substitute round for the AGS.

In a briefing at the Surface Navy Association’s annual symposium, Capt. Kevin Smith, Major Program Manager for the DDG-1000 [Zumwalt] Program Office, said the Navy continues to monitor future technologies and watch industry for a solution.

“The threat’s always changing out here and the requirements that the U.S. Navy’s looking at, as I said, this is a multi-mission ship,” Smith said. “There’s lots of things this ship can do but, right now, we’re going to be looking hard at what is the best technology to meet the requirements for the gun.”
Each of the destroyers costs roughly $4 billion. The USS Zumwalt, the first in class, was commissioned in late 2016; its successor, the Michael Monsoor, is expected to be delivered to the Navy in March. The final ship, the Lyndon B. Johnson, is set for delivery by 2020.

Capt. James Kirk, the first commanding officer of the Zumwalt, indicated that the designated purpose of the ship itself might be affected by its lack of a working mega-weapon.

“We’re going to be looking at shifting the mission set for this ship to a surface strike, land-and -sea-strike surface platform,” he said. “We’re predecisional on budget … but that’s what the focus is going to be, on a long-range surface strike platform, in contrast with previous focus on a littoral volume suppressive fires, in close to land.”

The AGS is designed to deliver a high rate of fire, as well as precision strikes.

Officials have discussed the possibility of arming the AGS with a hypervelocity projectile, such as the one the Navy is currently testing out with its futuristic railgun prototype, but a decision on whether to move forward has yet to be made. 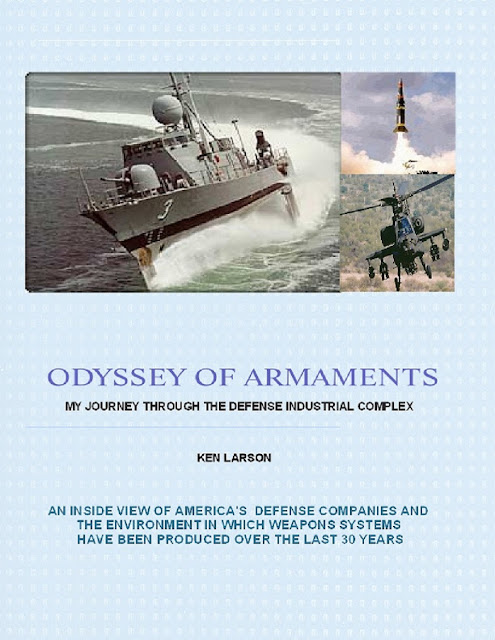 "Odyssey of Armaments" is a free download in Adobe format from the "Box" in the right margin of this site.

As we observe the current U.S. Defense Budget consuming enormous amounts of our available government funding and continuing in excess of $700 Billion annually,  this book details how the industry Eisenhower warned us about has become out of control.

A first person account by a Bronze Star decorated Vietnam Veteran who, after combat service, undertook a 36-year career in the US Military Industrial Complex (MIC) working on 25 large scale weapons systems in 12 corporations, including sales to 16 foreign countries.  These systems are in use today in the Middle East and throughout the world.

The book details the inside workings of the Military Industrial Complex among the armed service procurement offices and the mirror image corporations selling to them from Vietnam to Iraq.

Posted by RoseCovered Glasses at 11:39 AM No comments: