A BRIDGE TO THE FUTURE FOR THE COMMON GOOD

On August 1st, 2007, I was having dinner in a restaurant next to the Highway 61 Bridge in Hastings, Minnesota with a retired businessman, his girlfriend, and a local lawyer and his wife.  Glancing up at the TV over the bar, we were witnesses to the news of the 35W Bridge collapse into the Mississippi River.

As we left the restaurant we looked up at the underside of the Highway 61 Bridge since we had parked on the land side parking lot beneath it.  We noted the general condition of the structure and wondered if it too was a risky passage, 26 miles further downstream over the same body of water on which the 35W tragedy had occurred.

Within months the Minnesota DOT had come to the conclusion that the bridge was indeed  risky.  They began making immediate temporary repairs while planning for a new span.  The existing Hastings Bridge had been erected in 1951. Its planned replacement, scheduled for 2019, was accelerated to commence in 2010, based on the condition of the structure and the fact it is one of the busiest bridges in the state, handling enormous traffic as a major north/ south artery from the Twin Cities.

Local community meetings solicited input from the citizens on the design. The options were carefully weighed in terms of environmental and aesthetic impact.  Hastings, Minnesota is an old river town with a preservationist ethic that spans generations. That fact was not ignored.  The Highway 61 corridor has remained open, eliminating a major detour for commuters.

The state ran a competitive bidding process.  The winning contractor joint venture was a team of reputable companies who planned to use state of the art pre-stressed concrete as a design to construct the longest such span on the North American Continent, costing millions below the state estimate for the job.

Heavy girders have been manufactured locally in Minnesota and transported from north of Minneapolis to the Hastings site with computer steered special transports involving minimal disruption.  The large, arch frame for the bridge was recently floated downstream from a staging area near Lock and Dam 2 on the Mississippi after having been assembled by skilled union iron workers.

It was lifted in place on 24 September by the largest heavy lifting equipment company in the world, who traveled from Europe to support the project.

The Coast Guard, Corps of Engineers, State DOT, Hastings Community and all related support organizations have worked in a cooperative manner to achieve a demanding schedule.  The bridge work will be completed and the new span will open in the near future.

I have yet to hear a politician or agency official attempt to take credit for this project or pursue some form of attention-seeking advantage as a result of it.  In an election year, considering the nature of politics these days, that is a highly unusual occurrence.

I am sure there will be events commemorating the project success, as there should be; but it is my hope those events will celebrate the true nature of the achievement.

It has been a pleasure observing the Highway 61 bridge replacement over the Mississippi at Hastings. Its planning, execution and achievement have been exemplary to an old project manager who has witnessed difficulties with entrenched bureaucracies in industry and government for years.

This has been a shared, community, cooperative venture, worthy of note when considering models for the future of our country and the path it must take to overcome many challenges – political, economic and technological.

Certainly similar projects can be undertaken involving other infrastructure programs such as  education using the same form of cooperative, shared, professional action.

Let’s build bridges like this one in many other fields of endeavor! 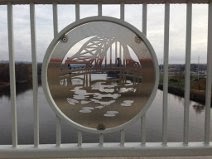